Doug Kennedy Announces Updates To Program For Front Desk Staff To Become ‘Certified in the Heart of Hospitality.’

Doug Kennedy, who is the President of Kennedy Training Network, Inc., (KTN) says “Now more than ever, your guests’ experience at the front desk impacts the financial success of your hotel.” In the past we all learned that “an unhappy guest tells 9 or 10 others…” but in the era of online guest reviews and social media postings those numbers grown exponentially. With most guests booking online, the front desk colleagues are truly ‘memory makers’ for your hotel’s reputation.

Unlike other industry certification programs which involve taking a passive, online class followed by simple multiple choice tests, KTN’s online CHH program is a highly engaging and personalized journey, which is essential for teaching intangible skills such as hospitality.

As Kennedy says, “This is why CHH is a ‘verb’ and not a ‘noun’ as other certification titles are. Being CHH is a lifelong philosophy to live by every day in your hotel career.” 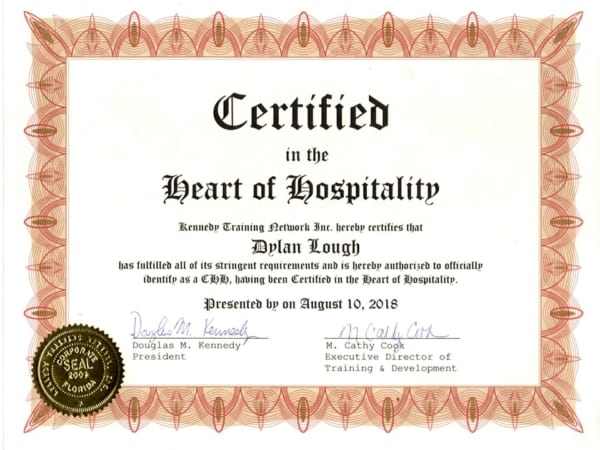 Here’s How It Works:

According to Kennedy, what’s new at this point is that KTN has added a “train-the-trainer” installation component to ensure long-term results.

Each hotel’s process begins with a private, live webinar for the top three managers responsible for the front desk to attend together as a leadership team. This provides a preview of the “5 Pillars of Hospitality Excellence,” so they can verify that the training content mirrors their in-house and/or brand standards. Next, the webinar covers KTN’s “3M’s of Hospitality Leadership,” pointing the way for managers to Model, Mentor, and Measure their team’s progress.

KTN has also simplified its pricing model, now offering a package price of $995. This includes CHH registration for 6 front desk colleagues, the Train-the-Trainer Leadership installation webinar, and also CHH certifications for up to 3 front office / guest services leaders.(9 Total registrations.) Additional front desk colleagues can be registered as CHH candidates at any time for the add-on fee of $99.

KTN’s initiative is led by M. Cathy Cook, Executive Director of Training and Development. Cathy began her career at the front desk over 30 years ago and has since held C-Suite level L&D positions with a major hotel brand. Kennedy says “Cathy Cook is uniquely qualified to lead for us. Not only is she an amazing communicator, having been designated by Toastmasters International as an ACG and ALS, but most importantly she is as passionate about hospitality excellence as anyone I’ve ever met.”

As of today, KTN has already had over 100 candidates from 14 hotels around the world achieve CHH since its soft launch in August of 2018.

As Published Previously at Hospitalitynet.org